Hey, I’m Sonny Eugen and I’m back here on CattailGardens to tell y’all a little bit of Pests control

I know that it’s very shameful when these bugs appear from GOD knows where in front of guests?

It is nasty when they come in front of your plate on the table while having breakfast, lunch or dinner?

And I can understand that it is very irritating when you feel like every inch of your body have some bad bug in it when you are in your bed or sofa?

And I know it is very scary to Encounter a Cockroach in the bathroom?

And it is very annoying to see your pet (dog and cats especially) scratching their body every time, sometimes even after a bath?

Your problem is none other than insects, the uninvited guests from time to time. These are little tiny roommates who don’t pay rent and each one of us is basically frightened and frustrated with these tiny unpaid monsters.

The existence of these insects has a mission to make one’s life not less than hell. Some people become that much frustrated that they just give up the hope of getting rid of them and used to start living with these nasty creatures.

There are so many products and companies claiming their product is the only solution to get rid of these insects but actually they don’t some of them doesn’t even cause a cough to a human body so killing insects is merely impossible, however, some products have good reviews as well and works so well but they are so costly that one has to save a whole month salary to buy it for the whole house while some products have an amazing performance and guess what? They are even available at an affordable price. Yes, I am talking about none other than HOT SHOT NO MESS FOGGER.

So, today we are going to talk about HOT SHOT FOGGER.

Just about last month, I used it at my basement and literally I haven’t seen any bugs in there yet but I know that if there’s anything in there, they’ll die for sure.

This hot shot no mess fogger is an amazing product that gives you the desired results after few hours of application. The hot shot no mess odor neutralizer creates a fine fog that invades the insects even in layers of carpets and in each hidden corner.

The insects in the corners usually get hide during the fumigation but this hot shot fogger penetrates in every nook and corner and gives an effective and immediate result without causing harm to your furniture, carpet, floor tiles, shades or blinds, clothing except for electronics etc. this fogger kills every type of crawling or flying insects within a few hours.

The hot shot no mess fogger kills the insects on contact after the opening of the bottle the sprays come out of a bottle within approx. 39 seconds.

PENETRATES IN EVERY NOOK AND CORNER

It gets penetrated within few seconds and on contact, it clearly kills the insects in every nook and corner whether the layers of carpet or the stitching of curtains in the wall detailing or the locks of the cabinet it kills every hidden insect and brings backs the clean insect free environment.

The bathroom and kitchen are mostly the lovable places of all the insects and certainly, the most hated insects live there, for example, all fleas live in the kitchens and it is a most irritating creature that causes an unhygienic environment. The hot shot spray is very effective at fleas

WON’T LEAVE A MESSY RESIDUE ON FURNITURE AND FABRIC

People generally ask for some solutions other than a spray as it leaves a greasy layer on furniture and spots on fabrics with an unbearable smell. But the hot shot fogger keeps the environment clean as it is made especially for a mess-free environment it won’t leave a messy residue or an irritating odor and it won’t affect the fabric as well.

The hot shot fogger is not for a very large space treatment. If you are living in a big house or a multistory building one or two bottles will not be effective or sufficient for treating the whole house. However, a room or a small space can be treated effectively with one or two bottles. As given in the description an area of 2,000 cu ft. can be effectively treated with one bottle. It doesn’t even cause harm to paint and floor like other nasty pesticides.

It kills all the flying as well as the crawling insects. For example Ants (except Fire Ants), Brown Dog Ticks, Crickets, Earwigs, Firebrats, Fleas, Black Carpet Beetles, Flies, Gnats, Mosquitoes, Palmetto Bugs, Houseﬂies, Pillbugs, Rice Weevils, Roaches, Saw-Toothed Grain Beetles, Small Flying Moths, Silverﬁsh, Spiders, and Waterbugs. The treatment of insect-killing is good but can cause harm to human health as well so it would be good to leave the building after the fogger is activated in the house.

The insect killing spray is generally avoided by the people because of some after effects of spray in which the biggest after effect is the odor. People avoid the odor that usually left by the spray which does not leave the house even after room spray. The hot shot no mess spray has really given a positive side in this problem. It does not leave any smell and people use it because of this as well

FOR INDOOR USE ONLY

The insects usually come from the outside landscaping and with the indoor plants but the fact is that this spray cannot be used in outdoor spaces for example courtyard and gardens and porch etc. however the gardens are considered as the main source of insects that comes in the indoor space through windows and doors. So all the indoor spaces such as cabins, shelves, crawl spaces, garages, storage areas, sheds trailers, and all enclosed spaces and things can be treated with the hot shot fogger.

Most of the people like the product a lot because the product gives an effective result, however, the result is not 100 % in one attempt. Many people who really want to get rid of these tiny monsters does not care about the amount or quantity of product or how much of a money they are spending, all they want is to get rid of insect but the fact is the product does not work in the first attempt after a use of one bottle the use of another bottle is sufficient to have a 100% result.

NOT EFFECTIVE ON SOME INSECTS

The hot shot fogger is effective on so many insects and even on their different species but some insects are so annoying that one attempt of the spray does not give the desired result, for example, the silverfish. So to get the desired result the repetition of attempt is required.

THE ATTACK IN CRACKS

After going through a lot of comments and reviews it is now proved that after a few months of this spray the insects do not come only from outside but inside as well. The spray penetrates in the whole room within seconds but the spray is not able to invade the permanent homes of these insects in the cracks of the wall. The cracks are sometimes bigger and that the spray does not reach there and thus the insect’s eggs stay even after the spray, so after few weak, the insects come out again and so an unbreakable chain continues.

The hot shot fogger is considered as the solution for killing all the insects whether in bathroom, kitchen, bedroom, lounge or basement. However, it is not applicable to outdoor spaces. The fogger does not leave any odor or stain. But the spray generally used for killing an insect or spray used as insecticides are injurious to human health directly or indirectly.

The spray sometimes leaves some of its penetrating particles which can cause harm to human health as the product clearly warns the user to leave the building after the spray is activated inside the house.

How to use Hot Shot Fogger more effectively:

The hot shot fogger is an effective product and is a time and energy saving product as well. It does not take so much time all you need is to switch off the flame and cover electronic devices. It clearly causes an effective killing of insects if not in one attempt than surely in the second attempt but does not use 2 bottles in one attempt. 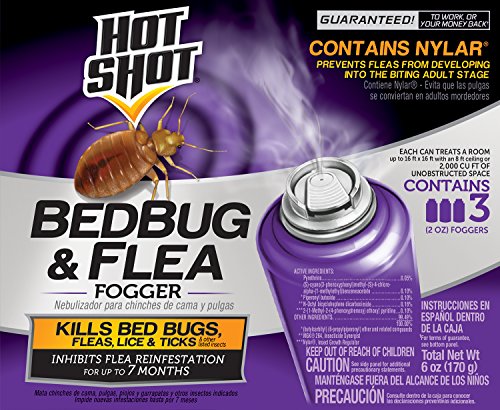